A/Prof Raf Ghabrial graduated from the University of Sydney, with Honours in Medicine in 1988. Since then, he has trained as an Ophthalmologist at the Sydney Eye Hospital. Afterwards, he gained unique experience in oculoplastic surgery in the United Kingdom and in the United States. He was appointed to New York University, the New York Eye and Ear Infirmary and the Manhattan Eye Ear and Throat Hospital. He has written numerous chapters for texts and scientific publications in medical literature. A/Prof Ghabrial is also regularly invited to facilitate lectures and surgical courses nationally and internationally.

A/Prof Ghabrial is Senior Lecturer at the University of Sydney and Senior Consultant Surgeon at Royal Prince Alfred, Concord and Sydney Eye Hospitals. He serves as an examiner to the Royal Australian and New Zealand College of Ophthalmologists (RANZCO) as well as representing the College for the Health Care Complaints Committee. He sits on many state and national committees including the Prosthesis and Devices Committee (Commonwealth Department of Health and Aging) and the Governing Body of Statewide Ophthalmic Services (Greater Metropolitan Task Force).

A/Prof Ghabrial is currently in private practice at Sydney Oculplastic Surgery in Sydney.

XXIX International Congress of Ophthalmology (Sydney)
The Role of Pharmacology in Patients with Ptosis.

Royal Australian College of Ophthalmologists Congress (Melbourne, Aust)
Attachment of the inferior oblique muscle after enucleation
Positive margins after periocular skin malignancy-what to do next?

Australian College of Ophthalmologists (National, Qld)
Aetiology of Childhood Proptosis
When is a lid lift not just a lid lift: Augmentation of blepharoplasty.

A/Prof Ghabrial attends Darwin in the Northern Territory of Australia on a regular annual basis. As an oculoplastic surgeon he provides a service at the Royal Darwin and Darwin Private Hospitals each year. He has been attending the Northern Territory for some ten years and in the past has gone to outlying communities including Catherine. The work performed is provided to local indigenous communities and the local patient’s who cannot get the service without flying away from the Northern Territory. Other outreach services have been performed in Bathurst from 1997 to 2006. Each month A/Prof Ghabrial provided outreach services to the Central West and drained patient’s from the Bathurst, Dubbo and Orange regions of the Central West.

A/Prof Raf Ghabrial has appeared on multiple episodes of Channel 9’s award-winning series “RPA”. The initial footage was in 2002, 2003 and 2004. They remain popular viewing on cable TV. He has further appeared on Good Morning Australia and other TV programs. A/Prof Ghabrial has spoken on Brian Wilshire’s show “All About Eyes” on 2GB and has written numerous articles for the press. 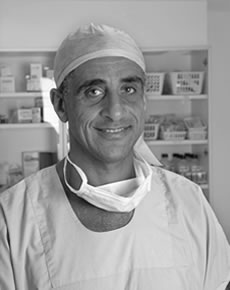